It’s nearly April and if we can trust the old saying, we can assume April showers are on their way. What’s good for May flowers isn’t as good for steel forms. Steel forms are strong, reusable and can produce smooth, attractive concrete surfaces. But for all of their positive qualities, steel forms are not without their vices. Rust on steel forms is one of the primary problems. Rust is a chemical reaction that occurs when iron combines with oxygen and moisture. Water will increase the rusting process as will heat. Concrete produces heat as it hydrates, effectively creating an ideal environment for rust development.

Rusted forms produce stained, discolored concrete surfaces – an undesirable result. To avoid this, the forms need to be free from rust before the pour. So, how is existing rust removed from a steel form? Sanding is one method but needs to be done gently and with caution. Electric sanders and grinders can actually damage the surface of the forms and make rust more likely. Harsh chemicals can also lead to further problems, not to mention how they affect the safety and health of your workers.

Rust on forms is a problem and can be difficult to remove and prevent. But not to worry because Nox-Crete has the solutions.

For existing rust on steel forms, our chemically active solution, Kem-Ex-It Plus won’t disappoint. This ready-to-use product breaks down and softens rust build up on your forms so that you can easily spray it away with a pressure washer. It not only removes rust scale from your steel forms, but also creates a protective barrier to prevent flash rust. Apply Kem-Ex-It Plus with the Nox-Crete Pump Foamer to create a thick foam that will cling to vertical and overhead surfaces, too. You can also use it to remove rust stains, salt deposits, and mortar splashings and lime water deposits from concrete and masonry surfaces. Plus, it’s effective in removing concrete buildup on steel and aluminum forms. 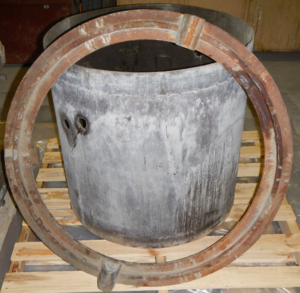 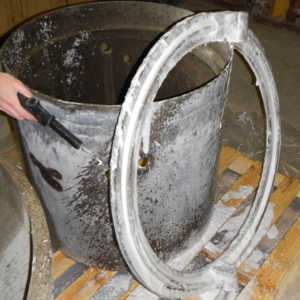 Apply Kem-Ex-It Plus with a pump foamer for a rich foam. 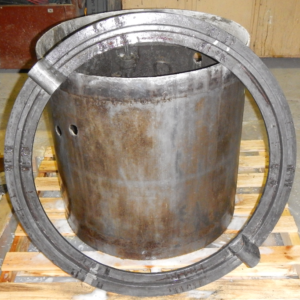 Once you’ve removed existing rust with Kem-Ex-It Plus, you’ll want to prevent future rust formation. For this, we recommend Formgard TJ Plus. This is a high performance rust inhibitor that chemically reacts instantly with surface moisture to form a waxy, protective coating that welds to the form surface both chemically and physically. It produces a highly water-resistant, polymerized film that provides rust protection from the corrosive effects of rain and salt water mist for up to six months of exposure to exterior conditions.

Use Formgard TJ Plus to prevent rust on: 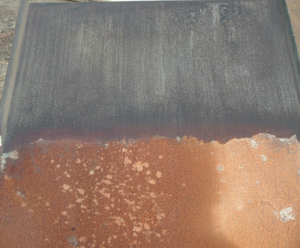 A portion of this bridge girder was treated with Formgard TJ Plus to prevent rust formation.

Just as Kem-Ex-It Plus has more than one use, Formgard TJ Plus does as well. This product doubles as a high performance precast concrete form release agent on molded fiberglass column forms, pan forms, waffle slab and dome forms. In precast applications, steel forms treated with Formgard TJ can be used immediately without removing applied product. The protective film won’t attract or hold dust.

Formgard TJ Plus is easy to apply with a hand pump sprayer, roller or brush and dries in approximately 30 minutes.

We’re proud to share with you that our PVC rustication strip product, Clean Line Reveal, is the Industry Choice winner in the Concrete Construction Equipment category in Hanley Wood’s 2018 Most Innovative Products. This award is presented annually in conjunction with the World of Concrete. Attendees of the tradeshow and audiences of Concrete Construction and The Concrete Producer vote on products they deem to be innovative to the industry. A panel of industry experts, many of whom serve on the World of Concrete Educational Advisory Board, also have a hand in selecting the winners.

About Our 2018 Most Innovative Products Winner

Clean Line Reveal  (or CLR) is available in a variety of profiles to create design details in tilt-up and precast structures like never before. The extruded high density PVC material makes the strips lightweight and durable, and unlike wood, they’re oblivious to climate change. CLR is easy to install, easy to remove, and produces a clean, uniform finish that’s incredibly smooth. Wood reveals contain sugars that can leach from the wood, resulting in discoloration and retardation; CLR eliminates this concern. Additionally, there is a reduction in labor costs because this product eliminates the need for priming, sanding, and repairs. Plus, it's easy to cut pieces in the field with a circular/miter saw. 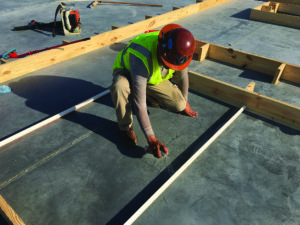 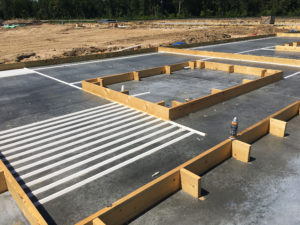 We consider it an honor to have Clean Line Reveal win the Industry Choice MIP. Winning this category in particular serves as a testament to the quality of this product. We congratulate all of the other nominees and winners of their respective categories and we look forward to the innovative products and ideas the industry will see next year. 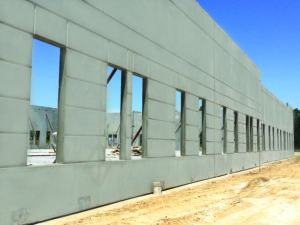