“The Concrete Décor Show’s main focus is geared towards offering extensive training and knowledge of the newest techniques in decorative concrete,” said artist Rachel Knigge-Bruce, owner of FloorMap Stencil Designs. “The Brawl brought more attention to the show itself drawing the attendees back to watch the work in progress.” 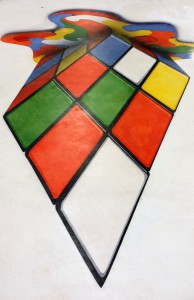 Using a flat concrete overlay as a canvas, Knigge-Bruce used stencils and concrete dyes to create a warped-perspective Rubik’s Cube that took on a three-dimensional effect from certain viewpoints. It was one of her first attempts at the technique, though she has been working with stencils to create concrete art for more than five years.

“I’ve wanted to play around with the warped 3D designs for some time,” she said. “It turned out really great, yet I can imagine doing so much more. I’m not there yet, but I will be. It just takes practice.”

Knigge-Bruce chose a Rubik’s Cube because of its relatively simple lines and shapes that require less shading and detail. Until she is more familiar with the process and the warped shading involved, she has focused her efforts on simple objects. If she were to create a scene with realistic creatures climbing out of the earth, for instance, every detail would require shading, which would be drastically warped, to ensure the desired effect is created.

“There was a lot less room for error with something like the Rubik’s cube,” she said. “I’m testing the waters until I perfect the technique.”

To those unfamiliar with the process, however, it’s difficult to see how much more perfecting Knigge-Bruce needs to do. The cube pops off the surface, leading the viewer to think a giant Rubik’s cube is sitting right in front of them.

Overall, it took a total of 13 hours to complete the project, Knigge-Bruce said. The design needed to be planned, stencils needed to be cut and the art needed to be installed – which alone took approximately 7 hours. 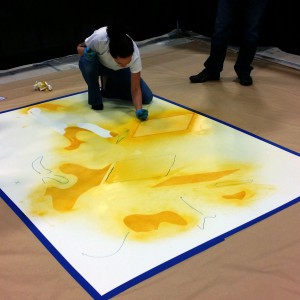 “You have to have an eye for detail and a lot of patience,” Knigge-Bruce said. “A simple distraction could cause a panel to get skewed, throwing off the whole design.”

To get the vibrancy needed for the cube’s many colors, Knigge-Bruce used Nox-Crete’s Duro-Color Dyes, which she first used at the 2014 World of Concrete Convention.

“I love working with the Nox-Crete Duro-Color Dyes,” she said. “The colors are vibrant and they have a Royal Blue that I especially like. They work great and penetrate beautifully.”

Knigge-Bruce says anyone can do what she does. More often than not, the designs that she sells are basic logo designs. These require very little skill to install and involve only solid colors. The airbrushing and shading that Knigge-Bruce incorporates in many of her designs are for those with a little more experience.

“It’s like paint by numbers,” she said. “With the stencil design, each area of color is isolated and clearly marked. With practice and patience anyone can do it.”

Looking at her work, one isn’t so sure that’s true.