A growing trend within the concrete flooring industry is to apply liquid hardeners on freshly-troweled concrete in what is referred to as a “pre-seal” or a “cure-coat.” Conversely, Nox-Crete has historically advised applicators to wait and apply liquid floor hardeners a minimum of 28 days after concrete placement to allow for maximum performance. The 28 day recommendation was based on intuition and a strong understanding of the chemistry behind liquid floor hardeners and the means by which they densify concrete surfaces. The lack of conclusive data led Nox-Crete to not only ask but to answer the question, does the timing of the application (Day One vs. Day 28) impact the liquid floor hardener’s ability to improve abrasion resistance? 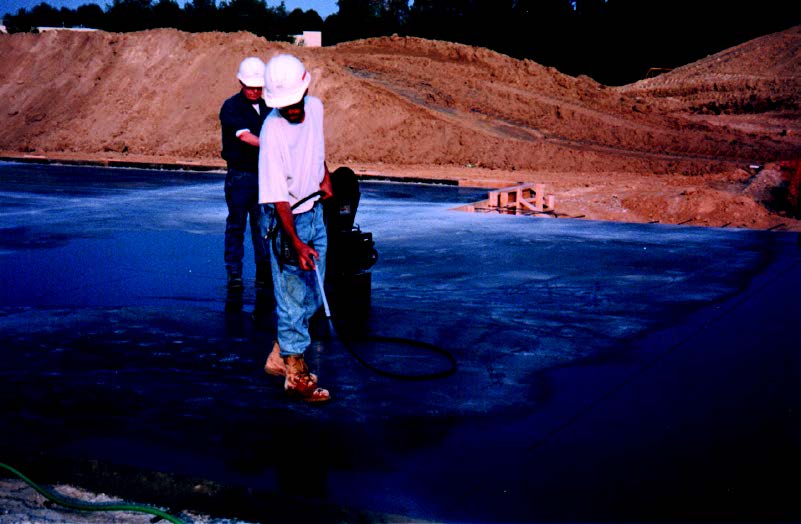 When water reacts with cement, it forms calcium silicate hydrate gels that provide most of the strength in concrete. A byproduct of that reaction is calcium hydroxide, a soft material that does little to increase the strength of concrete yet it occupies as much as 15% of the volume of cement paste. Silicate-based liquid floor hardeners take advantage of calcium hydroxide by chemically reacting with it to form calcium silicate hydrate gels – the desired component in concrete. These gels fill calcium hydroxide-saturated bleed water channels and voids to increase the treated concrete’s surface density, strength and durability.

The majority of the surface pores and capillaries in freshly placed concrete remain filled with mix water for several hours or longer after concrete placement. As concrete hydrates and cures, mix water can remain within the concrete for days or longer continuing to react with cement resulting in stronger concrete. The longer the concrete has to hydrate the more calcium hydroxide byproduct and calcium silicate hydrate gels are produced. By day 28, the majority of the cement has been hydrated, much of the excess mix water has evaporated and the concrete has reached its theoretical design strength.

Conversely, after 28 days of hydration, pores and capillaries are theoretically free of excess mix water and calcium hydroxide is abundant. Hardeners, having a clear path into the pores and capillaries and able to penetrate beyond the concrete’s surface, react with the calcium hydroxide throughout the slab and create calcium silicate hydrate gels. The performance of liquid floor hardeners are limited when concrete to be treated lack a sufficient amount of calcium hydroxide, or when it is unable to penetrate due to the surface being saturated with water.

The ASTM D4060 Taber Test Method mounts concrete disk test specimens to a turntable platform that rotates at a fixed speed. Two abrasive wheels are lowered onto the specimen’s surface and abrade the specimen as it rotates. Abrasion is measured by the amount of ground up concrete removed from the surface. Concrete dust/debris is carefully collected from the abraded specimen and weighed on an analytical balance. The more concrete debris removed and collected, the more heavily abraded the surface. 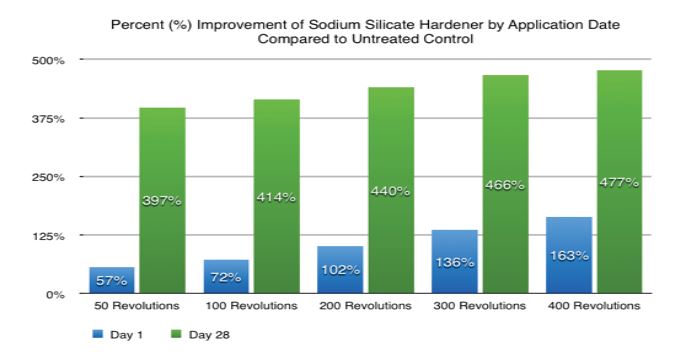 The timing of the application (Day One vs. Day 28) does impact the liquid floor hardener’s ability to improve abrasion resistance, impact resistance and long term durability and performance of the floor slab. These results validate what Nox-Crete has advocated for years – apply liquid floor hardeners after 28 days for maximum performance. The concrete disks with the hardener application on Day One significantly underperform when compared to the disks treated with the hardener on Day 28. This is likely a result of a lack of sufficient calcium hydroxide available to properly react with the hardener on Day One and excessive mix water preventing the liquid hardener from penetrating as deep as it can after 28 days of curing.